On February 18, 2019, the People's Court of District 1, Ho Chi Minh City returned a first-instance verdict to recognize painter Le Linh as the only author of the "Infant Progidies of Viet country" comics. This copyright ownership dispute has lasted for 12 years, attracted public interest, especially the publishing community. 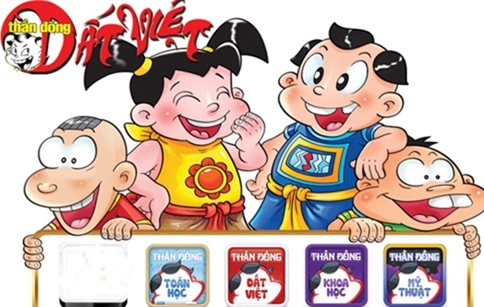 In the morning of February 18, 2019, the People's Court of District 1, Ho Chi Minh City returned a first-instance verdict to recognize painter Le Linh as the only author of the "Infant Progidies of Viet country" comics. This case of copyright ownership dispute has lasted for 12 years, attracted public interest, especially the publishing community.

Protecting her client at the first-instance trial, the plaintiff’s lawyer affirmed that painter Le Linh himself directly created 4 figures of characters in the "Infant Progidies of Viet country", namely “Trạng tí, Sửu ẹo, Dần béo và Cả mẹo” ( “Great Ti, Twisty Dan, Fatty Dan and Big Tricker) from sketching to finishing stages to register copyright; from there to make other variations in the series of comic book. The evidence is that the original sketches, on the cover of  volume no.1 to volume no.78, had recognized the work of  painter Le Linh. Especially in volume no.37, painter Le Linh was also introduced as the author of the comic book.

Meanwhile, the defendant said that the plaintiff did not directly create the work, Ms. Hanh herself is the one who  told the dialogues of the characters in each story and guided on how to segment and deliberate to suit characters in each drawing. Painter Le Linh's main job is to arrange the characters' dialogues into the appropriate position in the frame at each page of the book. The court held that the defendant's argument was unfounded. Before registering the copyright, from volume no.1 to volume no.6 of the "Infant Progidies of Viet country", it was printed on books’s cover that painter Le Linh is the author of the story and painting. During publication of the comics’s volumes Phan Thi Company also determined that painter Le Linh participated in 6 steps of the publication process and is the author of the series; there is not any content in the book showing that  Painter Le Linh and Ms. Hanh are co-authors. Painter Le Linh's name appeared on the cover of the book as an author in volumes from no.1 to no.78, and painter Le Linh was paid the full royalties by Phan Thi Company according to the existing regulations.

Article 8 of Government Decree no.100/2006/ND-CP dated September 21, 2006, was amended and supplemented by Decree 85/2011/ND-CP dated September 20, 2011 on detailing and guiding the IP Law (now replaced by Decree 22/2018/ND-CP dated February 23, 2018) stipulates that  “authors means persons who personally create part of or the entire literary, artistic or scientific works” and “ organizations and individuals that render supports, give comments or supply documents to others to create works shall not be recognized as authors”.